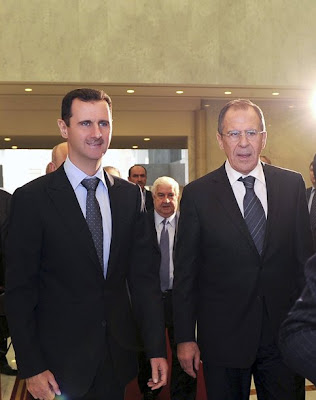 
With deep regret and outrage, the GCC member countries are closely following the increasing rhythm of killings and violence in Syria in what could be described, in its least terms, as collective massacre against the unarmed Syrian people and the demonstration of the Syrian regime's brutal acts against children, the elders and women as well as no respect for human rights or humanitarian ethical feelings, the statement issued by the GCC presidency [Saudi Arabia] said.
The GCC countries suggest that the Arab countries ought to meet at the Arab League next week to take the necessary decisive measure to stop this dangerous escalation against the Syrian people after nearly one year of illusive tactics without any glimpse of hope in the offing, the statement added.
The GCC member states express profound pain and regret for the killing of innocent souls and the infliction of great sacrifice on the people of Syria as their governing regime was not defending the country against an external aggressor but, in fact, running a power-conflict game that never cares about the Syrian peoples dignity or freedom.


When the model is Chechnya, it's going to make the Saudis look good.  What did George Bush see in Vladimir Putin's soul?

Photo of Bashar al-Assad and Sergei Lavrov by SANA/Reuters.
Posted by P O'Neill at 8:28 PM
Email ThisBlogThis!Share to TwitterShare to FacebookShare to Pinterest