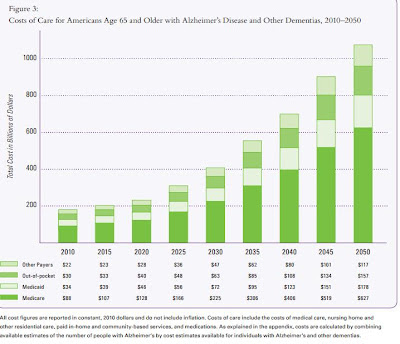 So Paul Ryan told so many lies last night it seems to have surprised even the people who were expecting lies.  Here's an implied one that needs more attention:

In Congress, when they take out the heavy books and wall charts about Medicare, my thoughts go back to a house on Garfield Street in Janesville. My wonderful grandma, Janet, had Alzheimer’s and moved in with Mom and me. Though she felt lost at times, we did all the little things that made her feel loved. We had help from Medicare, and it was there, just like it’s there for my Mom today. Medicare is a promise, and we will honor it. A Romney-Ryan administration will protect and strengthen Medicare, for my Mom’s generation, for my generation, and for my kids and yours.

The chart above is from a recent US Alzheimer's Association report which shows the total projected cost of Alzheimer's care by major components including Medicare and out of pocket. It sure sounds like from his remarks above that Paul Ryan was promising to find all that money for Medicare and to cap per person out of pocket expenses. Yet Ryan's actually Medicare plan only indexes current costs to general inflation, ignoring the demographic and cost factors that drive diseases like Alzheimer's.
Posted by P O'Neill at 3:33 PM
Email ThisBlogThis!Share to TwitterShare to FacebookShare to Pinterest
Newer Post Older Post Home