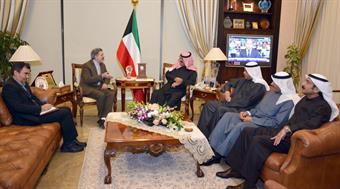 While Kuwait has today joined Saudi Arabia in the latest feud with Iran by withdrawing its ambassador from Tehran, signs suggest that their heart is not entirely in it. For one thing, withdrawing the ambassador is not the same thing as shutting down their Tehran embassy. For another, they've released a photo from the meeting of the Iranian ambassador in Kuwait with the Ministry of Foreign Affairs, where it's said he was presented with a protest note. The meeting looks fairly cordial!

Photo via Kuwait News Agency.
Posted by P O'Neill at 4:15 PM
Email ThisBlogThis!Share to TwitterShare to FacebookShare to Pinterest