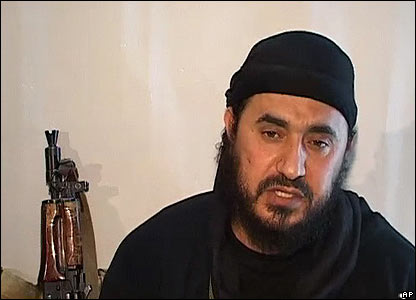 More from that Condi interview with Fox News:

SECRETARY RICE: ... what really ultimately cost al-Qaida in Anbar is they were clearly foreigners and they have tried - they almost succeeded -- they have tried to make al-Qaida Iraq - Iraqis. You know, we're trying to turn over security responsibility to Iraqis by training Iraqis; well, they have similar plans. They were going to turn al-Qaida operations over to Iraqis because they must have sensed that the - that their "foreignness" was starting to be a liability.

But this is a place - I can't prove it to you, but I think when the history of this is written, I think the loss of [Abu Musab al-Zarqawi] was really part of the start of this.

SECRETARY RICE: He was diabolically brilliant. I think he was an outstanding organizer, I think he had a kind of strategic sense, and I don't think the follow-on leadership has been quite as good. So when you hear people say, "You know, well, if you kill one of them, they'll just replace him with another leader," remember that that's like saying, you know, if you take out Robert E. Lee or Ulysses S. Grant, well, they'll just replace them with another leader. It's - there are people who are better at this than others and I think the loss of Zarqawi, they - they started to make more mistakes.

SECRETARY RICE: He was diabolically brilliant. The idea to try to set Sunni against Shia in the way that they did, you know, with the Samara bombing and all of that was really (inaudible).

So leaders of al Qaeda in Iraq are now being compared to American civil war generals, and no one could have foreseen that Iraq's sectarian divide could be a basis for stirring up a war until Zarqawi came along. Brilliance is truly in the eye of the beholder.
Posted by P O'Neill at 6:17 PM
Email ThisBlogThis!Share to TwitterShare to FacebookShare to Pinterest
Labels: Buffoonery, GWOT, Middle East, Reactionary Right
Newer Post Older Post Home