Speech by Jörg Asmussen, a member of the Executive Board of the ECB,at the  Martinsgansessen Nordmetall, Hamburg, 27 November 2013. He's addressing the claim that Germany's strength in trade makes it harder for other Eurozone countries to adjust --

Monetary union is a team sport - and when a teammate is in good shape, everyone benefits.

As Paul Krugman explains, in a monetary union, it's easier for the team to look good when everyone slacks off a bit.
Posted by P O'Neill at 7:06 PM
Email ThisBlogThis!Share to TwitterShare to FacebookShare to Pinterest

The long-awaited report does not suggest a motive for Mr. Lanza’s actions, even as it offers a glimpse into his strange, troubled life. It comes nearly a year after the shooting set off a national discussion about gun control, mental health and violence in American popular culture.

The word being discussion when the journalistic habit would have been debate.

There is no debate about gun control. It's long lost.
Posted by P O'Neill at 5:48 PM
Email ThisBlogThis!Share to TwitterShare to FacebookShare to Pinterest

Near abroad and nearer

A representative piece of reporting, from the New York Times, on Ukraine's decision to put off sealing an association agreement with the European Union --

The Ukrainian government on Thursday said it was suspending plans to complete the agreements and would instead pursue improved economic relations with a competing trade bloc led by Russia. The decision upends the European Union’s top foreign policy initiative, an effort to draw in former Soviet republics and promote Western-style political and economic overhauls.

It appears that while EU leaders were happy to hide behind Russian obstructionism on Syria, they never extrapolated that to how Russia might behave regarding a really close country, like Ukraine.
Posted by P O'Neill at 4:41 AM
Email ThisBlogThis!Share to TwitterShare to FacebookShare to Pinterest

This Wall Street Journal tick-tock on the Bashar al-Assad chemical weapons attack in August is a must-read for a variety of reasons (this link should find a free version) but among the revelations is that Hezbollah knew once the attack unfolded that it was the Syrian government -- because their own fighters had not been warned in advance and got caught up in it, so they had to phone in a request to stop it.

4 months later, none of the phalanx of bloggers who weighed in against US intervention in Syria has anything to say about Syria. We told you so.
Posted by P O'Neill at 3:54 PM
Email ThisBlogThis!Share to TwitterShare to FacebookShare to Pinterest

Riyadh, Muharram 17, 1435, Nov 20, 2013, SPA -- An official source stated that the government of the Kingdom of Saudi Arabia strongly denounces and condemns the cowardly terrorist bombings in the Lebanese capital Beirut yesterday. The Kingdom of Saudi Arabia extends condolences to the families of the victims and the Lebanese government and people, wishing all injured a speedy recovery. The source added that the Kingdom reiterates its stance towards condemnation of terrorism in all its forms and manifestations, whatever its origin or motivation. --SPA

You'd never know from that statement that the bombing targeted the embassy of Iran. It probably didn't help that Hezbollah blamed Saudi Arabia for the bombing, unwilling to recognize the blowback and asymmetric response created by its own actions in Syria.
Posted by P O'Neill at 6:05 PM
Email ThisBlogThis!Share to TwitterShare to FacebookShare to Pinterest

Writing in the Saturday Wall Street Journal, Dan Hannan MEP uncorks another bottle of that trusty brew, the view that the "Anglosphere" -- a select group of English system legacy countries -- provides the epitome of state-citizen relations. Towards the end, some musings about whether India is in da club:

In India, governments come and go as the result of elections, without anyone being exiled or shot. The armed forces stay out of politics. English is the language of government and of most universities and businesses. Property rights and free contract are secured by a common-law system, which remains open to individuals seeking redress. Shared values lead to shared habits. When, in the aftermath of the tsunami 10 years ago, the U.S., Australian and Indian navies coordinated the relief effort, they found an interoperability that goes beyond even that found among NATO allies. If India were to take its place at the heart of a loose Anglosphere network, based on free trade and military alliance, the future would suddenly look a great deal brighter. Of course, to join such a free trade area, the U.K. and Ireland would have to leave the EU. But that's another story.

Perhaps it's flattering that he thinks Ireland is such an integral part of the Anglosphere that any meaningful grouping would have to involve it. Not very clear is what would be in this for Ireland, which, for example, already seems to have a level of tax integration with the UK and US that it can handle. It's also worth mentioning that David Cameron letting the genie out of the bottle with his EU membership referendum may be bringing the realities of such a decision for Ireland closer than people think.
Posted by P O'Neill at 4:22 AM
Email ThisBlogThis!Share to TwitterShare to FacebookShare to Pinterest 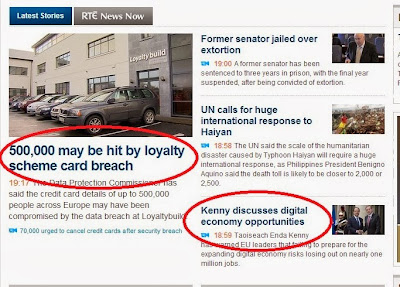 RTE website in the last hour. Underlying story -- which appears to involve an inexplicable concentration of sensitive information in one place.
Posted by P O'Neill at 7:50 PM
Email ThisBlogThis!Share to TwitterShare to FacebookShare to Pinterest

Wait till the Qataris see his impersonation of the Emir

FIFA President Sepp Blatter meets the Emir of Qatar, Sheikh Tamim, today. The official statement gives no hint of the, er, hot, topics that needed to be discussed.
Posted by P O'Neill at 5:15 PM
Email ThisBlogThis!Share to TwitterShare to FacebookShare to Pinterest 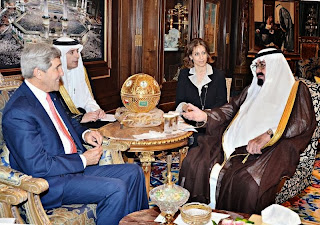 Riyadh, Muharram 1, 1435, Nov 4, 2013, SPA -- The Custodian of the Two Holy Mosques King Abdullah bin Abdulaziz Al Saud received at his palace here today U.S. Secretary of State John Kerry and the accompanying delegation. At the outset of the audience, the U.S. Secretary of State conveyed to the Custodian of the Two Holy Mosques greetings of U.S. President Barack Obama. In turn, the King sent his greetings to the U.S. President. Then, they discussed aspects of cooperation between the two countries, the developments of the Palestinian cause and the situation in Syria in addition to the regional and international latest developments and the two countries' stances towards them. The audience was attended by Crown Prince Salman bin Abdulaziz Al Saud, Deputy Premier and Minister of Defense; Prince Saud Al-Faisal, Minister of Foreign Affairs; Prince Muqrin bin Abdulaziz Al Saud, Second Deputy Premier, Special Envoy of and Advisor to the Custodian of the Two Holy Mosques; Prince Meteb bin Abdullah bin Abdulaziz, Minister of National Guard; Prince Mohammed bin Naif bin Abdulaziz, Minister of Interior; Prince Abdulaziz bin Abdullah bin Abdulaziz, Deputy Minister of Foreign Affairs; Prince Mohammed bin Salman bin Abdulaziz, Chief of the Crown Prince's Court and Special Advisor to the Crown Prince; Adel bin Ahmad Al-Jubeir, Saudi ambassador to the United States, and Timothy Lenderking, U.S. Charge D'affaires in Riyadh. --SPA

One person is conspicuously absent from that list of attendees: Prince Bandar bin Sultan, who has been leading the rhetorical charge against the US hands-off policy on Syria.

A side note about the meeting. Note that King Abdullah had no objection to an unveiled female interpreter.

Photo: SPA.
Posted by P O'Neill at 3:13 PM
Email ThisBlogThis!Share to TwitterShare to FacebookShare to Pinterest

If we call him the Bahraini Jon Stewart, people might care

An investigation is underway to probe the violations which marred the licensed rally which was held yesterday , Central Governorate Acting Chief Prosecutor Hamad Shaheen Al-Bouainain said. A notification submitted by The Central Governorate police directorate prompted the public Prosecution to launch the legal inquiry. “The violations amount to crimes which are punishable by the law as they contravene the law governing rallies and protests”, Mr. Al-Bouainian. He pointed out that participants in the rally chanted humiliating slogans which represented an affront to public order, moral decency and contravene the laws governing rallies ...Al-Wefaq Society secretary-general  (Sheikh Ali Salman) has been summoned to appear before the Public Prosecution tomorrow (Nov3, 2013), accused of humiliating the Interior Ministry. In a statement tonight, Minister of State for Information Affairs and Government’s Official Spokesperson Samira Ibrahim bin Rajab said that Al-Wefaq secretary-general is accused of denigrating and disparaging the Interior Ministry. The association organized an event showcasing models, miniatures and drawings alleging policemen’s systematic use of inhuman practices and human rights violations. Al-Wefaq Society secretary-general and other members delivered instigative speeches packed with lies and allegations at the opening of the event, which represented an affront to the status of police.
Posted by P O'Neill at 9:24 PM
Email ThisBlogThis!Share to TwitterShare to FacebookShare to Pinterest

Is that east or west of the Bann?

The UK Treasury report into the options for RBS introduces a new phrase that is sure to catch on:: "Core Ulster." This is the least bad part of Ulster Bank, which apparently is still bad enough that more of it will get dumped into a new internal bad bank. As usual of course, the term "Ulster" is prone to mislead, since a huge part of the bank's overall problems are in the Republic of Ireland.
Posted by P O'Neill at 2:44 AM
Email ThisBlogThis!Share to TwitterShare to FacebookShare to Pinterest
Newer Posts Older Posts Home
Subscribe to: Posts (Atom)