There are frequent references to how the Trump Presidency is characterized by "norm violations." Here is Josh Marshall arguing that the term has become a way to avoid addressing outright criminal or at least guilty-mind conduct. But what did violating norms ever mean? Here's German sociologist Niklas Luhmann in The Reality of the Mass Media on that exact topic (and, yes, we've quoted Luhmann before, in the belief that he's a genius) --

Norm violations are especially selected for reporting [by the media] when they can be accompanied by moral judgements, in other words, when they are able to offer an opportunity to demonstrate respect or disdain for people. In this regard the mass media have an important function in the maintenance and reproduction of morality. However, this should not be taken to mean that they are in a position to fix ethical principles or even just to raise society's moral standards towards good behaviour. No person or institution in modern society is able to do that - neither the Pope nor a council, neither the German parliament nor Der Spiegel. It is only wrongdoers caught in the act who demonstrate to us that such criteria are needed. It is only the code of morality which is reproduced, in other words the difference of good and bad, or evil, behaviour. The legal system is ultimately responsible for setting criteria. The mass media merely provide a constant irritation for society, a reproduction of moral sensibility at the individual as well as the communicative level. However, this leads to a kind of 'disembedding' of morality, to moralizing talk which is not covered by any verifiable obligations. The way morality is imagined and its ongoing renovation is linked to sufficiently spectacular cases - when scoundrels, victims, and heroes who have gone beyond the call of duty are presented to us. The receiver will typically align herself with none of these groups. She remains - an observer.

Now apply this insight, that the media treatment of norm violations is "moralizing talk which is not covered by any verifiable obligations" to the current political context in the USA. How did things get to the point where restraints on power were almost a play, a show, with standards that could only be verified when broken? That's quite a constitution you have there, America.
Posted by P O'Neill at 1:39 AM No comments:
Email ThisBlogThis!Share to TwitterShare to FacebookShare to Pinterest

Mark Dubowitz has been telling the Washington foreign policy community that on the Iran nuclear deal, he was a "fixer" not a "nixer" i.e. that he wanted to improve the deal rather than end it, and he has edged his predictions for what would happen now with all sorts of qualifications about whether Trump can successfully implement a new approach. As Peter Beinart points out, having done all the lobbying that could be done to kill the deal, he now claims that he never wanted it ended -- cynically recognizing the risk of being associated with a failed alternative that he enabled.

Anyway, here is in the opinion page of Tuesday's Wall Street Journal (writing with Richard Goldberg) --
America’s new strategy also presents European leaders with a choice: Either help curb all of Iran’s malign activities in exchange for major American economic and diplomatic concessions, or cast their lots with the repressive theocracy responsible for a 2012 terror attack in Bulgaria, and for the bloodshed in Syria that created a refugee crisis in Europe.

Does this sound like someone with regrets about the new course of American strategy? Instead, it sounds like someone who got what he wanted -- the ability to wage an all-out economic war against Iran, regardless of the direct and collateral damage.

Posted by P O'Neill at 2:10 AM No comments:
Email ThisBlogThis!Share to TwitterShare to FacebookShare to Pinterest

How to get on in society

Last year, Richard Reeves published a book, Dream Hoarders, arguing that the focus on the top 1 percent was distracting from the obstacles to mobility caused by the upper middle class. Liberal writers headed to the nearest keyboard to debunk Reeves (e.g. Mike Konczal in the Crimson-hued Vox) with the debunking taking the form of interpretations of charts of income and wealth distributions, while minimizing by assertion the significance of the cultural and class analyses in his book -- and indeed making the topics of culture and class a source of mockery when they were picked up by David Brooks.

It was therefore to the great annoyance of the debunkers that Matthew Stewart took another run at the Reeves argument in The Atlantic and this time it's Jordan Weissman who steps forward in the Crimson-hued Slate, again with the aid of income and wealth distribution charts, to debunk Stewart. And again refuses to engage with the social and cultural aspects of the argument, while allowing that there might be a bit of a point on housing and education capture by the upper middle class.

Anyway, the most telling omission in the Konczal and Weissman articles is politics. They take it for granted that the 1 percent, or the 0.1 percent, must be having an outsized gilded age influence on politics. But they don't want to extend that to pondering how the merely very wealthy -- but far more numerous -- upper middle class might be influencing politics, both in the issues and approach they champion, and in the reaction to that that is drawn from further down the income and wealth distribution.

It's only coincidental, but it's an especially strange week to have such a blind spot in your political analysis: the death of Tom Wolfe, who chronicled in real time the transition of an influential cohort from radical to, er, chic, and there are the numerous reflections on Paris 1968 and its American parallels, where the fact that this was an emerging consumerism associated with a new class is now taken as an initial given -- at least for people who care about the sociology of it all. How did that class rise from being in the streets in 1968 to dominate the professions and the political-cultural complex now?

Posted by P O'Neill at 10:00 PM No comments:
Email ThisBlogThis!Share to TwitterShare to FacebookShare to Pinterest

Texas Governor Greg Abbott uses a wheelchair because, in 1984, he went jogging after a storm and an oak tree fell on him and paralyzed him below the waist.

He sued the landowner and won a US$10 million settlement.

After the Santa Fe high school shooting yesterday, he was reduced to the usual NRA-friendly platitudes and simply dodged the question of the responsibility of the gun owner -- the shooter's father.

Why does he believe in accountability for landowners of fallen trees but not for gun owners of mass murder weapons?
Posted by P O'Neill at 3:30 PM No comments:
Email ThisBlogThis!Share to TwitterShare to FacebookShare to Pinterest

Jo Ellison in the Financial Times:

One wonders whether the choice to wear a designer who melds a British artistic sensibility with a French house fabled for its classic silhouettes and minimal allure could mark the announcement of globally focused, pro-European tastes within the house of Windsor? It probably does. At least when it comes to clothes.
Posted by P O'Neill at 12:55 PM No comments:
Email ThisBlogThis!Share to TwitterShare to FacebookShare to Pinterest 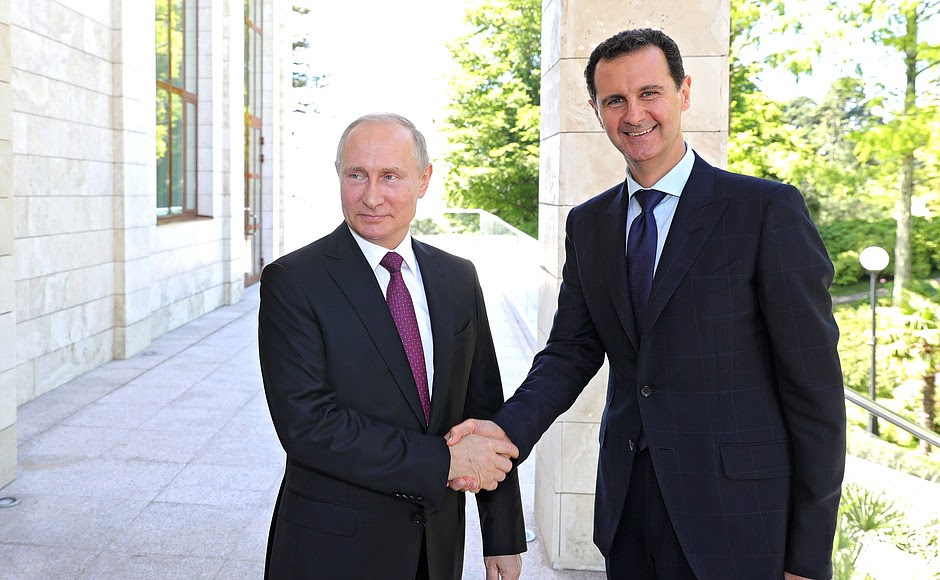 Above, Bashar al-Assad on an unannounced visit to Sochi today to meet his main backer, Vladimir Putin. There was no indication afterwards that Russia had used any of its leverage to extract new concessions on a political process for the conflict. Incidentally, despite the energetic efforts of the Al-Assad/ Maduro fanboys on Twitter, the booing at the Eurovision song contest on Saturday is probably a more reliable indicator of how Russia's foreign policy stances are viewed abroad.
Posted by P O'Neill at 8:48 PM No comments:
Email ThisBlogThis!Share to TwitterShare to FacebookShare to Pinterest

It's not among the top 10 things that's wrong with Israel's security forces shooting Gaza border protesters, but somewhere down that list is the fact that Israel's rationale for using lethal force doesn't hold together. Suppose that a few hundred or even a few thousand protesters were determined enough to break through the fence. Then they'd be ... in Israel, with nowhere to go, no support base, no logistics, just facing inevitable pursuit and capture. But what would be gone with their incursion is the psychological barrier, that Israel can literally and figuratively fence itself off from the Palestinian question. And that doubt, that fear of the hordes, justifies in Israeli eyes what by usual standards would be a disproportionate response. All the embassy gloating in Jerusalem can't remove that idea from people's heads.
Posted by P O'Neill at 1:26 AM No comments:
Email ThisBlogThis!Share to TwitterShare to FacebookShare to Pinterest

Netanyahu, in this view, has always seen the Palestinian issue as a diversion — a “rabbit hole” that misinformed Westerners insist on going down.

It's a little strange how much that Matrix-influenced terminology -- red pill, rabbit hole -- has influenced the rhetoric of conservatives, but one possibility is that it's something that they've heard from each other as they compare notes on their true knowledge of liberal prejudice and the "real issues" in the Middle East.
Posted by P O'Neill at 5:55 PM No comments:
Email ThisBlogThis!Share to TwitterShare to FacebookShare to Pinterest

Putin hacked it for Israel to make it up to Bibi for not keeping the Iranians under control in Syria.
Posted by P O'Neill at 10:48 PM No comments:
Email ThisBlogThis!Share to TwitterShare to FacebookShare to Pinterest
Newer Posts Older Posts Home
Subscribe to: Posts (Atom)