Statement from Kennedy School of Government at Harvard University --

CAMBRIDGE MA. -- Felipe Calderon MC/MPA 2000, HKSEE 2003, the outgoing president of Mexico and a Harvard Kennedy School (HKS) alumnus, has been named the Inaugural Angelopoulos Global Public Leaders Fellow at the Kennedy School, it was announced today by HKS Dean David T. Ellwood. He will begin the Fellowship in January 2013. Calderon is nearing completion of a six-year term as Mexican president, serving as the nation's second democratically elected president since the end of the Institutional Revolutionary Party's 70-year hold on power.

He is credited with having boosted the nation's economic development as a pro-business, pro-free market leader and having made significant reforms to the country's environmental, immigration and health care policies. During his presidency, Mexico hosted the United Nations Conference of the Parties (COP-16) global climate change talks in December 2010, and the G-20 meetings in July 2012, for which Calderon served as Chair.

Er, wasn't there some other stuff going on in Mexico during his time as President?
Posted by P O'Neill at 3:49 PM
Email ThisBlogThis!Share to TwitterShare to FacebookShare to Pinterest

Once they stop being sheep, they're ours

It may be because Asians, like Jews when they first emigrated, have congregated in cities, which are run by Democratic-party machines who may demand a certain level of “loyalty,” shall we say, to compete for city business or to deal with city licenses. To the extent Asians then seek to leave the cities through education and entering the professions, they move into other areas controlled by the Left.
Posted by P O'Neill at 3:08 AM
Email ThisBlogThis!Share to TwitterShare to FacebookShare to Pinterest

At National Review's The Corner, Katherine Connell purports to clear up some of the alleged confusion that surrounds the implications of the Savita Halappanavar case for the abortion debate in the USA --

He [Ta-Nahesi Coates] is mistaken that a consistent pro-life position requires that abortions be viewed as “murders.” The law recognizes multiple types of homicide for a reason, and in the circumstances Coates is discussing there is clearly no malicious intent.

What doctor would want the words "homicide" and "malicious intent" following him or her around after a crisis abortion decision, even if the politicians decide that in such cases there would be homicide but not with intent?  Note to pro-lifers: a system of OK, we'll take a look at these medical murders after the event and tell you which ones we'll let you away with is probably not going to be enough comfort to the doctors who have to decide these things on the spot.
Posted by P O'Neill at 2:53 AM
Email ThisBlogThis!Share to TwitterShare to FacebookShare to Pinterest

In which we agree with the Islamists

The Keeping Up with the Kardashians star is visiting Bahrain for the first time to officially open the new Millions of Milkshakes franchise at The Walk Bahrain in Riffa on Saturday, in association with Sevens Holding SPC. She [Kim Kardashian] will fly in for the one-day visit after attending a similar launch party in Kuwait. Her planned visit has sparked anger among Islamist legislators, who submitted an urgent proposal at the end of Tuesday's parliamentary session, where they referred to Ms Kardashian as "an actress with an extremely bad reputation". However, the proposal was dismissed because other MPs quickly dispersed the chamber, forcing parliament chairman Dr Khalifa Al Dhahrani to end the session without voting on the issue.

The headline on the story is "Star's visit is big boost for Bahrain," which may mean that things in Bahrain are worse than commonly believed.

On the other hand, there should be major relief that she is not going as US cultural ambassador to Bahrain. We'll let State Dept spokesperson Victoria Nuland explain --

MS. NULAND: I do have a little something on this. So we had a Bahraini entity that approached the Embassy about cosponsoring a visit by this guy [Andrew W.K.], who I take it is pretty popular there in Bahrain. That was initially approved. And then when more senior management at the Embassy took a look at this, the conclusion was that this was not an appropriate use of U.S. Government funds.
QUESTION: Is that – did – and would they – the government would have paid for his trip over there, had it –
MS. NULAND: I don’t know what the details of our sponsorship were to be.
QUESTION: Can you explain why it was – was it – I mean, his – was it that – it was decided that it was inappropriate to send someone over there to Bahrain to represent the United States whose hits include Party Till You Puke and things like that? (Laughter.) Is that why it was decided it was inappropriate?
MS. NULAND: Thank you for sharing that. I think --
QUESTION: Is that why?
MS. NULAND: I think the conclusion was, when they looked at the body of his work, that we didn’t need to be part of this invitation. I’ll leave it --
QUESTION: Got you. And just hold on. And just to make clear, it was – the invitation was actually never extended to him? MS.
NULAND: Frankly, I don’t have the details. There may have been some preliminary conversations with him, but he is not going to be going to Bahrain on the U.S. Government’s dime.

Posted by P O'Neill at 8:57 PM
Email ThisBlogThis!Share to TwitterShare to FacebookShare to Pinterest

It's fine and well you're looking

Online newspaper headlines this morning screamed that King Abdullah of Saudi Arabia was "clinically dead."  Here's the King today  doing a good job -- for a dead person -- of sipping Arabic coffee with Crown Prince Salman. Do Syrian and Iranian propaganda outfits really have nothing better to do than spread dodgy rumours about the Saudi royals?

Mr Carney was born in Fort Smith, Northwest Territories, Canada in 1965. As a Canadian citizen he is a subject of Her Majesty The Queen.
Posted by P O'Neill at 5:22 PM
Email ThisBlogThis!Share to TwitterShare to FacebookShare to Pinterest 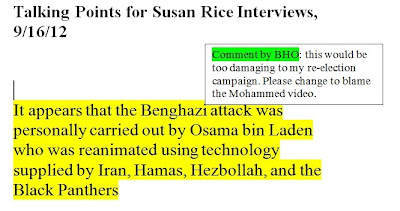 This blog has obtained exclusive must-credit access to the original versions of the Susan Rice talking points file for her now notorious September 16 interviews after the Benghazi consulate attack. We have excerpted the key section above.
Posted by P O'Neill at 2:49 AM
Email ThisBlogThis!Share to TwitterShare to FacebookShare to Pinterest

Success has many fathers

This [USA-Ireland} friendship was evident this year as Ireland welcomed some 35,000 American visitors to Dublin in September for the American football match between Notre-Dame and the US Navy. [I have been told that Notre-Dame has gone on to have a fantastic season and currently sit undefeated and as top seeded team. Perhaps Notre-Dame should consider opening each season in Dublin! There is no doubt that other teams will be looking at Notre-Dames season and trying to replicate the success – including the trip to Dublin - and I am sure that an exclusive and long term deal could be agreed for the “fighting Irish.”
Posted by P O'Neill at 2:07 AM
Email ThisBlogThis!Share to TwitterShare to FacebookShare to Pinterest

Guy Fawkes masks have been banned from (UAE) National Day celebrations amid fears that people could wear them to symbolise opposition to the state."Legal action will be taken against anyone wearing the masks during the celebrations," said a security source.
Posted by P O'Neill at 1:40 AM
Email ThisBlogThis!Share to TwitterShare to FacebookShare to Pinterest

She had more to her life than that

The above very questionable headline on a Wednesday AP story about Savita Halappanavar has through the wonders of news wires and syndication followed the underlying story all over the world. To state the obvious, she didn't show up at the Galway seeking an abortion. She showed up sick and pregnant.
Posted by P O'Neill at 12:05 AM
Email ThisBlogThis!Share to TwitterShare to FacebookShare to Pinterest

The White House Fellows Program was founded in 1964 by President Lyndon B. Johnson. This non-partisan program offers exceptional men and women first-hand experience working at the highest levels of the federal government. Fellows also participate in an education program consisting of roundtable discussions with renowned leaders from the private and public sectors. Following the Fellowship year, Fellows are expected to repay the privilege by contributing to the country as national leaders and public servants. Selection as a White House Fellow is highly competitive and based on a record of remarkable professional achievement early in one's career, evidence of leadership potential, a proven commitment to public service, and the knowledge and skills necessary to contribute successfully at the highest levels of the federal government. ...

Interesting account in the Wall Street Journal of why the US stock market was so hard hit yesterday: many traders had gone heavy into stocks in anticipation of a Romney victory --

Jerry Harris, chief investment officer at Sterne Agee in Birmingham, Ala., which manages $17 billion in assets, was among those who had placed bets on Mr. Romney winning the election. Mr. Harris had put money into some health-care stocks on Monday and Tuesday, predicting they would get a bump. While some health-care stocks rose, others sold off. Mr. Harris now regrets his move, though he said the damage to his portfolio was minimal. "It wasn't a big risk, but I did the two [trades] with the deliberate intention of thinking we'd get a boost out of stocks if Romney won," he said. On Wednesday, Mr. Harris said he told himself: "You've been caught leaning. You know better than to have strong opinions before an event like that." The selloff surprised Thomas Lee, stock-market strategist at J.P. Morgan, who before Tuesday had called for a postelection rally through year-end no matter which candidate won. "There were probably more people than we realized hoping for a Romney win," he said.

Especially noteworthy is that while you'd normally think of these big speculative bets as being based on hard analysis, the positions were driven -- as their chastened holders admit -- by a hope that Romney in, along with a revealingly cynical assessment as to which equities would benefit (health insurance companies, banks, and energy companies).

There's already the question of how Karl Rove was able to rustle up so much in campaign contributions for Romney on what turns out to have been a futile bet. Now we know it was not just the campaign chequebooks that were caught by the fever.
Posted by P O'Neill at 12:55 AM
Email ThisBlogThis!Share to TwitterShare to FacebookShare to Pinterest

The sash his father wore

Sometimes a crest is more than a crest

So, the Paul Ryan ancestors are from Kilkenny and he is invited there next year, according to the Irish Times.

Since Everything Must Have Meaning, the Kilkenny city crest therefore represents the fortresses to which the rich would retreat under a Romney-Ryan presidency, with the main source of employment being the troops needed to invade other countries and generally keep order.

We recommend that Ryan entertain Kilkenny next year with tales of how great austerity is.
Posted by P O'Neill at 3:32 AM
Email ThisBlogThis!Share to TwitterShare to FacebookShare to Pinterest

About the most precariously held up highway overpass you'll ever see, the aftermath of a massive explosion in eastern Riyadh yesterday when a fuel truck hit one of the pillars, killing at least 22 people and injuring hundreds.