How we got here

Naomi Wolf told Bill Clinton, and later Al Gore, they should present themselves as the Good Father, strong enough to protect the home (America) from invaders.

It must have taken a lot of effort from the NYT editors to get her not to mention "earth tones" -- a ridiculous detail from her linked 1999 article which encapsulated the trivia of the media coverage of that election.
Posted by P O'Neill at 8:42 PM No comments:
Email ThisBlogThis!Share to TwitterShare to FacebookShare to Pinterest

In his justification for his favourable stance towards Crown Prince of Saudi Arabia MBS, Tom Friedman explained as follows:

It had to do with how I defined our most important national interest in Saudi Arabia since 9/11. And it is not oil, it’s not arms sales, it’s not standing up to Iran. It’s Islamic religious reform, which can come only from Saudi Arabia, the home of Islam’s holiest cities, Mecca and Medina.

And that becomes his basis for saying that whatever the complicity of MBS in the Khashoggi murder and his eventual fate in royal power politics, that agenda has to continue.

So the analysis is that the state is the means to reform the religion.

Among the revealing sights in the news today is a long list of obsequious statements from "official" Islamic bodies praising the way that the government of Saudi Arabia has handled the Khashoggi revelations (e.g. Muslim World League, Organization of Islamic Cooperation).

The credibility of the burst of late night announcements from Riyadh about the Khashoggi case -- timed for the Friday news dump cycle in the USA -- is somewhat affected by the fact that the head of a committee looking into the need to restructure the general intelligence agency is ... Crown Prince Mohammed!

Minor update: also on the committee is Ibrahim al-Assaf, one of the former ministers caught up in the Ritz-Carlton swoop last year.
Posted by P O'Neill at 11:26 PM No comments:
Email ThisBlogThis!Share to TwitterShare to FacebookShare to Pinterest

Now we are getting somewhere

His Highness also affirmed that what has been circulated with the existence of orders to kill him (Khashoggi) are lies and baseless allegations towards the government of the Kingdom, which upholds its norms and traditions and is in compliance with international laws, conventions and conventions.

That is a carefully crafted American PR firm style denial. It is not denying Jamal was killed. It is denying an order to kill him.

UPDATE 19 October: Confirmation on the importance of the word "orders:" Reuters story that there were no specific orders to kill, but there is a standing order to return critics to Saudi Arabia.
Posted by P O'Neill at 12:22 AM No comments:
Email ThisBlogThis!Share to TwitterShare to FacebookShare to Pinterest


Kanye West made his own news yesterday (the transcript is captivating) so there's probably been enough said about him. So here instead is one of his occasional collaborators, Lupe Fiasco, from 2006. When George W. Bush was President.
Posted by P O'Neill at 1:48 AM No comments:
Email ThisBlogThis!Share to TwitterShare to FacebookShare to Pinterest 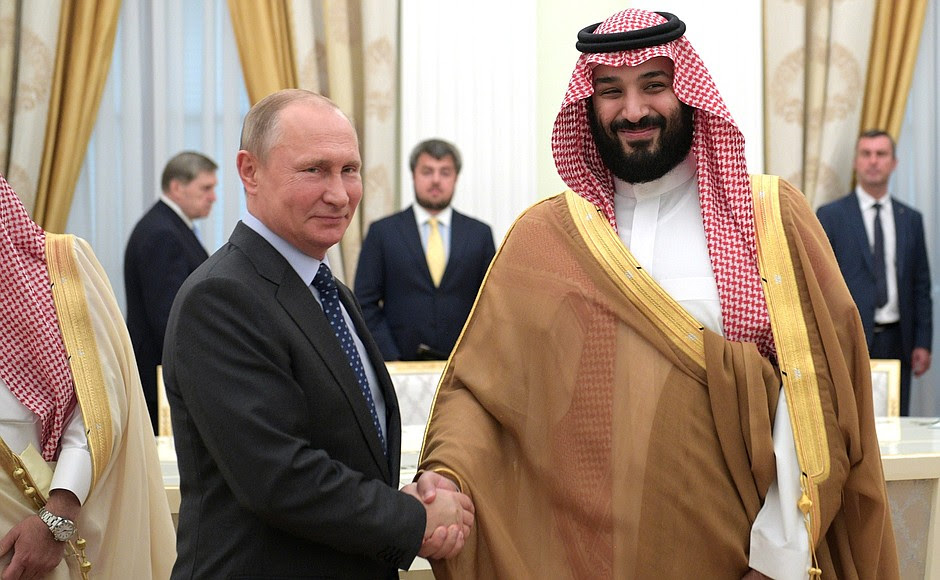 Now, in re Jamal Khashoggi, where exactly would the Saudis have gotten the idea for a brazen hit, just murky enough to be deniable, but just transparent enough so that everyone who needs to know knows what you did?

Above: Crown Prince MBS visits Vladimir Putin at the start of the World Cup.
Posted by P O'Neill at 11:16 PM No comments:
Email ThisBlogThis!Share to TwitterShare to FacebookShare to Pinterest

Quote of the (Kavanaugh) Day

When combined with the specific effects of professional training, such a background helps to explain that the magistracy's declared neutrality and its haughty independence from politics by no means exclude a commitment to the established order. The effects of such unanimous tacit complicity become most visible in the course of an economic and social crisis within the professional body itself. Such a crisis arises, for example, in an alteration of the mode by which the holders of dominant positions are selected. At such a moment, professional complicity of the sort just discussed collapses. Certain newcomers to the magistracy, by virtue of their position or personal attitudes, are not inclined to accept the traditional presuppositions defining the magistracy. The struggles they undertake bring to light a largely repressed element at the heart of the group's foundation: the nonaggression pact that links the magistracy to dominant power. To this point the professional body is held together in and by a universally accepted hierarchy and consensus concerning its role. But increasing internal differentiation leads to the body's becoming a locus of struggle. This causes some members to repudiate the professional pact and to openly attack those who continue to consider it the inviolable norm of their professional activity.
Posted by P O'Neill at 6:41 PM No comments:
Email ThisBlogThis!Share to TwitterShare to FacebookShare to Pinterest

His offer is this

Bloomberg: It does seem to be his [Trump] opinion that the kingdom should pay more for its security. So do you agree with that?

MBS: Actually we will pay nothing for our security. We believe that all the armaments we have from the Untied States of America are paid for, it’s not free armament. So ever since the relationship started between Saudi Arabia and the United States of America, we’ve bought everything with money.
Posted by P O'Neill at 9:43 PM No comments:
Email ThisBlogThis!Share to TwitterShare to FacebookShare to Pinterest

Up the Republic, Slight Return

Our independent judiciary is the crown jewel of our constitutional republic.

That bizarre sentence appeared in Donald Trump's original introduction of Kavanaugh as the nominee, so now we know where it came from. Bizarre because, for a group -- conservative lawyers -- that insists in the intrinsic meaning of words, it makes no sense to refer to a republic as having crown dimensions of anything.
Posted by P O'Neill at 12:44 AM No comments:
Email ThisBlogThis!Share to TwitterShare to FacebookShare to Pinterest
Newer Posts Older Posts Home
Subscribe to: Posts (Atom)