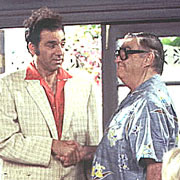 Again with the crazy names on the military operations in Iraq --

Phase 3 of the operation focuses on the criminal militia strongholds within the Hyyaniyah district area. Iraqi Army soldiers from the 1st and 14th Infantry Divisions are conducting the deliberate clearance operation.

The operation began at approximately 6 a.m. when British artillery and US aircraft released ordnance against known criminal rocket and mortar sites west of Hyyaniyah.

Charge of the Knights Phase 1 was the disastrous Iraqi government crackdown on the Mahdi Army in Basra, initiated by PM al-Maliki 3 days after Dick Cheney was in town. Although widely recognized as a failure, the US and UK have apparently decided that they have to maintain the illusion of their overwatch role in Basra with the government forces in the lead. Hence they bomb the hell out of place and let the Iraqis go in to mop up.

Saulat al Fursan: Phase III makes as much sense, with much larger stakes, as Morty's plan to install Kramer as his puppet on the board of Del Boca Vista Phase III.
Posted by P O'Neill at 2:41 PM
Email ThisBlogThis!Share to TwitterShare to FacebookShare to Pinterest
Labels: Buffoonery, GWOT, Middle East, Military-Industrial