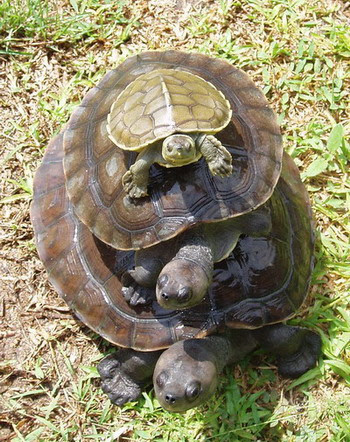 Today we have a space program befitting a President who rejects American exceptionalism, apologizes for America, and believes we should be just another nation with a flag. We have been put on a path that cedes our global position as the unequivocal leader in space. The Russians are leading in human spaceflight right now. The Chinese may someday look down at us from the Moon.

Contemplate for a moment the juxtaposition of a document claiming that America needs the technological and scientific leadership of the world in terms of space with its motivating observation that the Chinese might "look down" on America from the Moon.

If the issue is just the Chinese looking down at us from the Moon, wouldn't it be cheaper to just send some Americans in a ship beyond the Moon to look down at them?

Photo of turtles all the way down: Wikipedia user Pelf.
Posted by P O'Neill at 11:15 PM
Email ThisBlogThis!Share to TwitterShare to FacebookShare to Pinterest
Newer Post Older Post Home