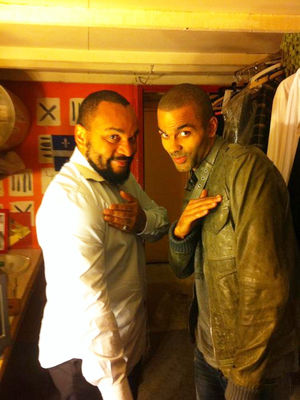 There are about 10 different things wrong with Mike Pence's idiotic and expensive stunt of flying across the country and back with the express purpose of taking offence, but number 10 on that list would be the hand-on-heart pose during the playing of the National Anthem.

Yes, there's a specification in the US code to do this, but it's unenforceable and it was only formalized in 1942. Which brings us to the quenelle, the arm gesture associated with French comedian and provocateur Dieudonné (seen here also being illustrated by Tony Parker).

Now, the quenelle is controversial because Dieudonné has not gone to much effort to hide the fact that it's an arm being prevented from doing a Nazi salute (which is why the other arm is sometimes placed over the arm with outstretched hand).

And that hand-on-heart thing: it was formalized because the previous alternative was a salute that looked too fascist from the perspective of 1942, but they wanted something like it: the Sieg Heil position, retracted. So the pose descended from a fascist salute is respectful, but kneeling during the anthem is not.
Posted by P O'Neill at 10:05 PM
Email ThisBlogThis!Share to TwitterShare to FacebookShare to Pinterest