From the Azores to Catalonia 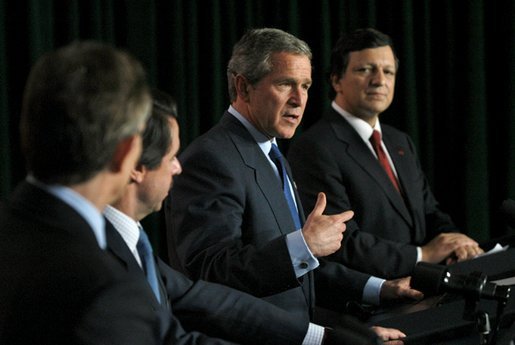 Something on which the world seems to need an occasional reminder: While George Bush and Tony Blair (rightly) attract most of the opprobrium over the Iraq war, the final sign-off decision on that war was endorsed by 4 people at the March 2003 Azores summit: Bush, Blair, Jose Maria Aznar (then Prime Minister of Spain) and Jose Manuel Barroso (then PM of Portugal). Aznar and Barroso continued with gilded careers in government and then the private sector -- recently, with controversy for Barroso's stint at Goldman Sachs.

Anyway, Aznar was PM as leader of the Partido Popular. In 2004, the PP lost the general election in the wake of the Madrid train bombing atrocities and the clumsy attempt of the government to blame them on ETA. Subsequent Socialist rule was ended by discontent over the debt crisis in 2011, and the PP has been in power since led by Mariano Rajoy -- who was in Washington DC last week and got Donald Trump's statement against the referendum. It's that PP government that is directing the crackdown on the referendum in Catalonia today.

The point is that the cartoonish nature of American conservatism (and the caricature of Blair as a one-off poodle to it) seems to have obscured what was happening in European conservatism: it was becoming more self-serving, opportunistic, and reactionary. And that's the Europe of Brexit, Poland, Orban, and rubber bullets being used on voters today.
Posted by P O'Neill at 3:20 PM
Email ThisBlogThis!Share to TwitterShare to FacebookShare to Pinterest