Hanging on in quiet desperation is the English way 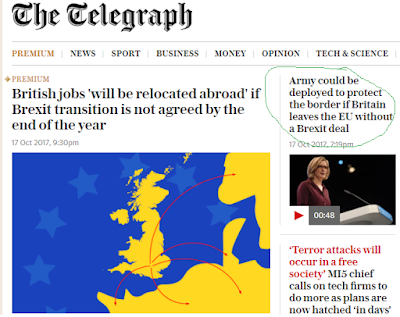 Do the Telegraph's Brexit true-believers (and its enthusiastic #Irexit retweeters) have any idea that the leading edge of Brexit panic has clearly arrived at the paper? The webpage currently up for Wednesday readers features a map of northwest Europe that is somehow trying to make a point about Britain's reverse Operation Sea Lion of jobs but does so by leaving out Ireland, and then an adjacent story which admits that despite all the bluster about imaginative technical solutions and an invisible border with Northern Ireland that only the EU wants to impose -- now they learn that the plan is to militarize the border in a no-deal scenario!
Posted by P O'Neill at 1:25 AM
Email ThisBlogThis!Share to TwitterShare to FacebookShare to Pinterest