The Playgirl of the Northern World 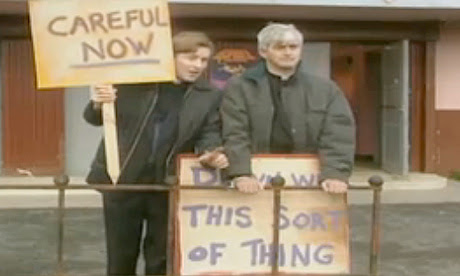 A farmer who allowed one of the world's best-selling pop stars to film in his grain field told her to cover up after she stripped down for a video.

DUP Alderman Alan Graham said he was fetching his tractor when he saw her and thought it was unacceptable. The 'Rude Boy' star was filming a new pop video in his Bangor field.

"I thought it was inappropriate. I requested them to stop and they did," he explained. "I had my conversation with Rihanna and I hope she understands where I'm coming from. We shook hands," he said.

Mr Graham admitted that he did not know who the 23-year-old sex symbol was when he got a phone call to ask for the use of his field in Bangor, County Down, for a pop video last week.
Posted by P O'Neill at 2:42 PM
Email ThisBlogThis!Share to TwitterShare to FacebookShare to Pinterest