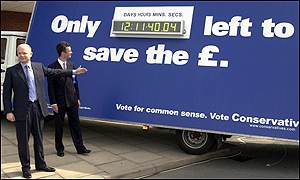 Then conservative leader William Hague with one of his Save the Pound election posters in May 2001. From an associated speech --

The question of whether we scrap the pound will settle our country's future, possibly for generations. It will determine whether we live in a free and independent country, or whether we become part of a larger bloc. "It is a question, ultimately, of self-confidence. Do we have faith in our capacity to thrive as an independent country? Or do we feel that we must go along with every new Brussels initiative for fear of being left out? "... The mainstream majority in this country understand this. They know that there is nothing negative about wanting to keep the pound. And they resent being called anti-Europeans, isolationists or sceptics simply because they want Britain to work with its neighbours as an independent country. "In fact, the real sceptics are those who doubt our ability to thrive on our own. It is a normal, natural thing for countries to administer their own economies. And yet, in this country - astonishingly - two of the three parties do not believe that the British people are best placed to run their own affairs. They would remove, forever, our right to tailor our economic policy to suit our own needs. "Whether we give up that right is the single biggest decision our country has faced since the war ... Twelve days to save the pound. Twelve days to secure our independence. Twelve days to decide whether our children and grandchildren will inherit the same freedoms that we inherited in our turn.

Posted by P O'Neill at 6:54 PM
Email ThisBlogThis!Share to TwitterShare to FacebookShare to Pinterest